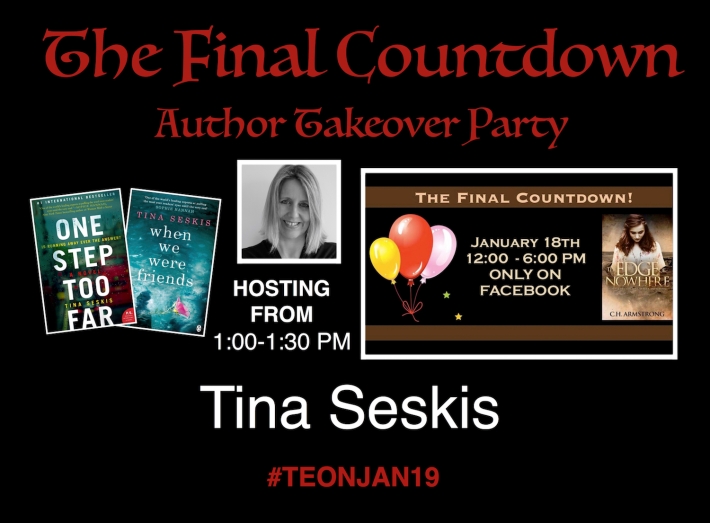 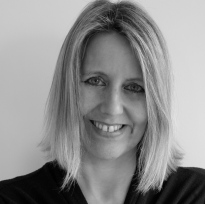 Today I’m thrilled to introduce you to the fabulous Tina Seskis, who will be the 2nd TAKEOVER AUTHOR as we  celebrate the release of my novel, The Edge of Nowhere, with THE FINAL COUNTDOWN AUTHOR TAKEOVER PARTY on Facebook.  Tina will be hosting from 1:00 to 1:30 CENTRAL TIME ZONE, and I’m almost more excited about Tina hosting than I am about my book releasing!  Okay — I did say almost!

Not only am I a huge fan of Tina’s writing, but she’s also someone I’ve come to consider a friend in the last several years.  She was one of the earliest among my friends and other published authors to send me virtual “high-fives” on the news of my novel, and she gave no end of support and sage advice in the early days as I considered the different avenues for publishing.

So let me tell you a little bit about how I know Tina.  Several years ago, I requested a book from NetGalley called One Step Too Far.  It was an awesome read and I immediately placed the book on my list of Top Ten Books I’ve read — so naturally I gave it a great review.  Several weeks later, I was shocked to receive an e-mail from Tina herself, thanking me for my review and asking if she could use it for some marketing materials she was putting out.

Privately, I was jumping up and down like a crazy fangirl and screaming.  Umm…YEAH!  She liked it!  She really liked my review!  Of course you can use my review!  Can I give you anything else?  Anything — Just ask!

To Tina, I think I responded something sedately along the lines of, “Of course. I’d be honored.”

Since that time, we’ve exchanged occasional emails, become Facebook friends, and follow each other on Twitter.  I’ve truly enjoyed getting to know Tina, and I just know you will too!  So let me share a little bit about Tina the Author.

Tina Seskis grew up in Hampshire, England, where her father worked at Heathrow for British Airways and her mother was in sales. Her parents bestowed upon her a certain degree of eccentricity: her dad amongst other things built a boat in the front garden on their commuter belt housing estate, moved the family into a touring caravan when their new house wasn’t built, and took them all over the world with his free air travel and limited budget. Part of Tina’s story-telling has been shaped by those experiences.

Tina studied business at the University of Bath and then worked for over twenty years in marketing, advertising and online sales, with varying degrees of success. She originally wrote One Step Too Far for her mother, whilst attending a local writing class on a Thursday afternoon. She completed her second novel When We Were Friends (formerly called A Serpentine Affair) in 2011, and is currently completing both her third and fourth. One Step Too Far is now available in over 60 countries.

Tina lives in North London with her husband and son, and currently writes full-time(ish). You can follow her daily tribulations with writing, dogs, kefir, moths etc on Twitter at @tinaseskis or on her Facebook page.

THE FINAL COUNTDOWN AUTHOR TAKEOVER PARTY is on January 18 from noon until 6:00 PM CENTRAL STANDARD TIME.  Tina will be the TAKEOVER AUTHOR from 1:00 to 1:30 and will be giving away a signed copy of her novel, One Step Too Far!  To win this copy, you’ll need to attend the event to see what Tina has in mind for selecting a winner.  This is, in my opinion, one of the best books released in the last several years, so you do not want to miss your chance to win a signed copy!

I recently featured Tina Seskis on this blog.  To read my review of One Step Too Far and the author Q&A featuring Tina, use this link.

In the meantime, take a few minutes to check out Tina’s website and find her on social media.  This is one author you will definitely want to know more about!

Check Out These Books by Tina Seskis 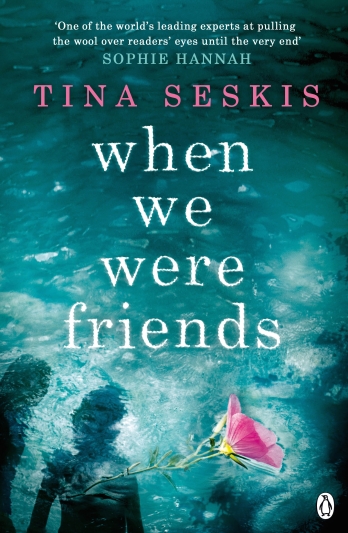 Today is Day 2 of our spotlight on THE FINAL COUNTDOWN takeover authors.  Did you miss one and want to catch up?  Follow this link to see who you missed!