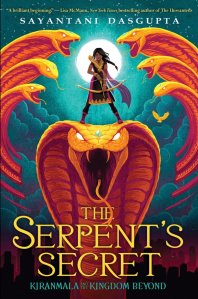 Several months ago I was scrolling through Twitter and came across the most interesting book cover reveal for a middle grade novel. As I’ve said countless times, I don’t read very many middle grade books, but something about this cover called to me and I fell in love with it. Poised atop the head of a cobra with her legs even with her shoulders is a fierce-looking young Indian girl. With a bow and arrow in her hands, a full moon shining behind her, and six cobras ready to strike on each side of her, she stood confident and ready for battle. To say she looked completely badass is an understatement. I remember thinking that this was a girl who knew what she wanted out of life and didn’t need Prince Charming on a white horse to save her. She’d save herself and Prince Charming, if the need arose.

I must’ve stared at that cover for a full half hour the first time I saw it, and each time the cover flashed through my Twitter feed, I fell more and more in love with the courage and confidence etched in the features of the character on the cover. I started following the author and, piece-by-piece, I learned a little bit about the story and its inspiration; and the more I saw the cover and the more I read about the synopsis, the more excited I became about it’s impending release and a chance to read it. I needed this book!

Today I’m excited to give you a full review of that novel and congratulate the author, Sayantani Dasgupta, on the “Book Birthday” of her debut title, THE SERPENT’S SECRET: KIRANMALA AND THE KINGDOM BEYOND (BOOK ONE).

First of all, I loved this book every bit as much as I’d hoped. It centers on a young Indian-American girl named Kiran. She’s a pretty normal/average girl, she thinks. She’s the daughter of East Indian immigrants who’ve settled in New Jersey and own a nearby Quickie Mart. And, like all well-loved children, she’s been told her entire life that she’s special–a princess.

Like most of us, Kiran assumes her parents are just eccentric. I mean, princesses aren’t real in America, right? Well…maybe; maybe not. When her parents disappear on her 12th birthday with only a hastily written birthday card with coded clues and a handful of rupees, and two peculiar princes show up on her doorstep to “save her” from a snarling monster known as a rakkosh, Kiran realizes this won’t be a normal birthday. In fact, she realizes that maybe she’s not the “normal” girl she always thought she was. With the help of the princes, she escapes on a winged horse and is carried to another dimension where she’s forced to accept her identity and save her parents from the sharp teeth of an even more ravenous rakkosh than the one she just escaped. To do that, though, she’ll have to come face-to-face with her biological father, the Serpent King, who poses a serious threat to her and life as she knows it.

THE SERPENT’S SECRET is fast-paced, funny, sweet, and completely compelling in every way. It features quirky characters, intrigue, the first blush of romance, mystery, and a smart young woman who finds within herself strength and courage she’d only barely imagined.

There are so many things I loved about this book. I loved the message that family isn’t always defined by blood ties, but rather by shared love; and that friendship isn’t determined by one’s status or caste. I loved the message that tears aren’t necessarily a sign of weakness, but can be completely healing; and I loved the humor and the riddles Kiran has to solve in order to find her parents. Basically, THE SERPRENT’S SECRET has everything boys and girls love in a good story, all wrapped up in one smart book. My only disappointment is that its release comes too late for my own children to read as middle grade students.

I completely enjoyed every aspect of this book and would recommend it to elementary school readers everywhere, and to classroom teachers for their bookshelves. It’s a wonderful read and sure to find an audience among those who enjoy books like THE LIGHTENING THIEF and HARRY POTTER.

PLEASE NOTE: The following content has been take verbatim
from the Scholastic Books webpage dedicated to this book.

On the morning of her twelfth birthday, Kiranmala is just a regular sixth grader living in Parsippany, New Jersey, until her parents mysteriously vanish later that day and a rakkhosh demon slams through her kitchen, determined to eat her alive. It turns out that there might be some truth to her parents’ fantastical stories — such as how Kiranmala is a real Indian princess — and a wealth of secrets about her origin they’ve kept hidden.

To complicate matters, two crushworthy Indian princes ring her doorbell, insisting they’re here to rescue her. Suddenly, Kiran is swept into another dimension full of magic, winged horses, moving maps, and annoying, talking birds. There she must solve riddles and slay demons, all while avoiding the Serpent King of the underworld (who may or may not want to kill her) and the rakkhosh queen (who definitely does) in order to find her parents and basically save New Jersey, her entire world, and everything beyond it…