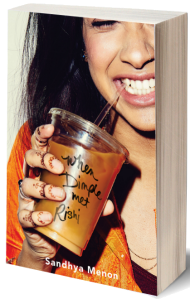 If you’ve followed the readers and writers on Twitter this last year, it’s been impossible to miss the hype about the young adult novel, WHEN DIMPLE MET RISHI. I first heard of it some time back when another author-friend was reading it, and I added it to my TBR list based strictly on the title. I have a habit of doing that; of loving the title or cover and reading a novel based upon that alone. And so far, it’s yielded me a great number of “favorite authors” in return. This time is no different.

WHEN DIMPLE MET RISHI tells the story of two young adults of East Indian descent learning to juggle the cultural expectations of their families with the norms of western culture; and it may well be the “sweetest” book I’ve read in recent years.

The premise of the book is rather simple. Dimple struggles with finding her place in the world as a modern American woman and the independence inherent with that culture, while satisfying her parents’ wishes in the much stricter culture of their home country. She feels a bit like a square peg being pounded into a round hole. She wants a college degree and a career, but her mother seems bent on marrying her off right out of high school to a nice Indian boy. Rishi, on the other hand, is a traditionalist at heart. He takes his responsibility as the oldest son very seriously, and he takes great pride in respecting the culture he was raised in, potentially at the risk of his own dreams. When the two meet and fall in love, they must decide whether their relationship can flourish when they both want different things — Rishi to respect his parents’ wishes to marry and raise a family, and Dimple to branch out and be a modern woman before settling down.

As a reader, I really loved this book. I loved the humor and the sweet story of first love; but more than that, I really enjoyed learning a little about East Indian culture. I can definitely see why there’s been so much hype, as there’s simply nothing not to love about WHEN DIMPLE MET RISHI.

Released May 30, 2017
by Simon Pulse
Synopsis taken from www.sandhyamenon.com

Dimple Shah has it all figured out. With graduation behind her, she’s more than ready for a break from her family, from Mamma’s inexplicable obsession with her finding the “Ideal Indian Husband.” Ugh.

Dimple knows they must respect her principles on some level, though. If they truly believed she needed a husband right now, they wouldn’t have paid for her to attend a summer program for aspiring web developers…right?Rishi Patel is a hopeless romantic. So when his parents tell him that his future wife will be attending the same summer program as him—wherein he’ll have to woo her—he’s totally on board. Because as silly as it sounds to most people in his life, Rishi wants to be arranged, believes in the power of tradition, stability, and being a part of something much bigger than himself.

The Shahs and Patels didn’t mean to start turning the wheels on this “suggested arrangement” so early in their children’s lives, but when they noticed them both gravitate toward the same summer program, they figured, Why not?

Dimple and Rishi may think they have each other figured out. But when opposites clash, love works hard to prove itself in the most unexpected ways.

One thought on “WHEN DIMPLE MET RISHI (Book Review)”