Today’s installment of The U.S. of Books Reviews comes to us from H.C. at The Irresponsible Reader blog and centers on the state of Maine.  Enjoy! 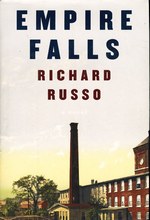 Reviewed by H. C. at The Irresponsible Reader (where you can find a longer, more rambly and personal version of this post)

It is just daunting to try to talk about this book — especially in something that’d make a decent-length blog post and not a full-fledged dissertation. Empire Falls won Richard Russo his (seemingly) inevitable Pulitzer Prize in 2002 and stands as one of the greatest achievements in his storied career. It is at once a story about a town and a man, microcosms for the state and the nation; it’s both sweeping and epic while being personal and intimate.

The story centers on Miles Roby, manager of the Empire Grill in Empire Falls, ME. He has an ex-wife (who I truly despised), a daughter (who I wanted more of), an ex-mother-in-law that seems to like and respect him a lot more than her own daughter, s (even if they don’t see eye to eye much lately). But more importantly he has a patron — the town matriarch, owner of the Empire Grill, and most of the various places of employment in town. She’s a patron, a would-be surrogate mother (for a select few), and petty tyrant over the city. It’s one of those small towns where the mayor/council/etc. have real power, but it’s only the power she lets them have, you know? Francine Whiting isn’t evil — well, I’ll let you decide for yourself — but at the end of the day, she thinks she’s doing what is right for Empire Falls, the Whiting legacy and her daughter — whether or not anyone wants what she thinks is best. She still could be evil, I guess, and I could very likely made a case for it. Anyhow, let the reader decide.

The trials and dreams and efforts of Miles and his family as he tries to do something different with his life are the core of the novel — but they’re not all of it. The town is full of interesting people — many aren’t vital to the overall story (but you can’t know until the end who those are), but they all add flavor. Most are so fleshed out that you could imagine a short story/novel centered on them. While reading Song in Ordinary Time a few months back, I kept asking myself what made the people in that novel so unlikeable when in many ways they reminded me of Empire Falls‘ cast. I came to this conclusion (and have since reconsidered and still think it’s basically right): Russo uses the flaws in his characters to emphasize their humanity, Morris uses the flaws to emphasize their flaws.

But I come not to bury Morris (again), but to talk about Empire Falls, so let me focus on this a bit more: the flawed humanity isn’t pretty, it’s frequently ugly, people who make mistakes (some tragic, some dumb) are usually trying to do the right/moral/noble thing and it doesn’t work. But it’s real. This could all be real. Even Janice, Miles’ ex, is a well-developed character — and I think I’ve met a handful of people just like her — and I wouldn’t dislike her as much as I did if Russo hadn’t nailed the writing.

There’s an event towards the end — one of the two or three that you ultimately realize the whole novel has been leading up to — that in 2001 would’ve been truly shocking (shocked me a few years ago), but in many ways it’s de rigueur now. 2016 readers might be bored by it, but I can’t imagine that many readers in 2001 were. I’m not going to say more — just if you read this, put yourself in the shoes of readers from 15 years ago when you get to that bit.

Yes, Empire Falls is slow (sometimes), ponderous (sometimes) but it’s also inspiring (sometimes), heartwarming (sometimes) and many other things that I could parenthetically qualify. But every negative about it is utterly worth it for the positives.

What I learned about Maine: (haven’t done this in awhile, whoops). It’s a beautiful state, filled with people who could be better educated, who aren’t vocationally ready for what’s coming for them thanks to the technological shift in jobs. It’s a state where people, nature and industry who have been damaged by reckless policies and practices. It’s a state where nature exerts itself every now and then to remind people how powerful it is. Basically, Maine’s just like every other state in the union — just a little different.

One more thing, not that this’ll surprise many, but I’d advise skipping the HBO miniseries — yeah, it’s a fairly faithful adaptation, it just doesn’t have the heart.

I’ll be honest with you, I didn’t read this book for this series of posts — breaking a personal resolution. There were 3 reasons for this: 1. Time; 2. I really wasn’t up for the emotional punches this delivers, and 3. I didn’t need to — I still remember it well enough to discuss at a length greater than I have despite being 4 years and change since I read it. That right there should tell you something about the book — hundreds of books later and I almost feel like I read it a couple of weeks ago. I’m not sure that this is the Russo novel I’d tell people to start with (probably Straight Man), and I don’t think it’s his best (probably Bridge of Sighs (tells a story almost as epic in scope, with greater economy and greater depth when it comes to individual characters), but there’s no denying the talent on display here, the greatness of the execution, the vibrancy of the characters, or the impact it has on the reader. No brainer, 5 Stars from me. 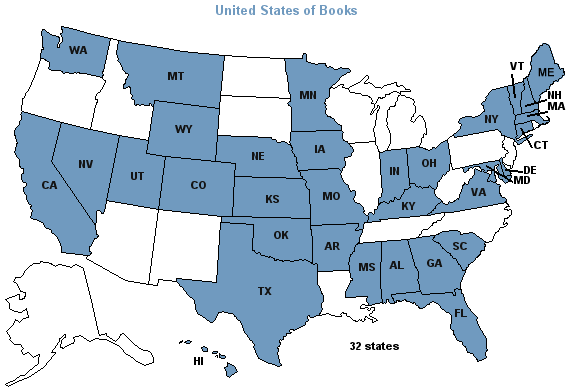