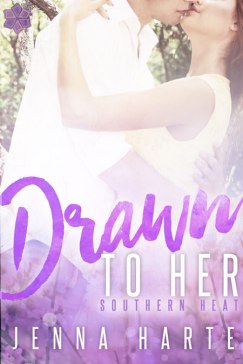 One of the coolest perks of being a published author is having the opportunity to preview books by other authors before their official release dates.  Recently,  my friend Jenna Harte wanted a second set of eyes to check errors in the final draft of her novel, Drawn to Her.  I had time on my hands — I have nothing but time on my hands these days since I’m still recovering from a fractured knee! — so I volunteered to help.

I have good news and bad news for Jenna.  The bad news is that I made a lousy second pair of eyes.  The reason for that is actually the good news:  I enjoyed the story so much that I forgot that my “job” was to look for errors in the text, and found myself instead so wrapped up in the story that (if there were any errors) I missed them!

Drawn to Her is a really smart, well-written contemporary romance about a young nurse who has taken a job as a hospice caretaker to a crusty old man who has spent his life with the misguided priorities of business first, family second. Now in his final days, he has set his twin grandsons — who he raised after the deaths of their parents — against each other in a competition to win the family business.

In order to get a leg-up on the competition, one of the old man’s grandsons moves into his home to get his business insights and, as of course must happen in a romance, the young man eventually falls in love with the sassy and headstrong young hospice nurse.

Jenna Harte is truly a talented author who completely nails the chemistry between the main characters in the first few moments of their appearance together on a page. It was well-done, believable, and had me truly rooting for the main female character.

Not only was this a really fun and fast read, but what I loved best about it was the eventual realization by the old man that the most important thing in life isn’t business, but family. To me, watching the realization of that “life lesson” unfold for the characters took this book to a new level and gave me far more enjoyment.

If you’re a fan of contemporary romance, I strongly recommend this novel by Jenna Harte.  Drawn to Her will be released on April 12th by Penner Publishing, and is the latest in a string of fun romances by the talented Jenna Harte.  Check it out!

One thought on “Book Review: Drawn to Her by Jenna Harte”