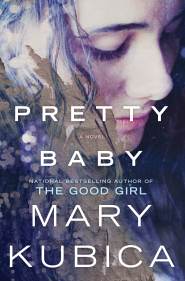 Several months ago, I read Mary Kubica’s debut novel, The Good Girl.  I remember gasping at the opening paragraphs, caught by the throat by her writing and needing to know more about the main characters right away.  At the time I placed it near the top of my list as one of the Top Five Books I’ve read in 2015. Today, Ms. Kubica has a fierce challenger — herself!

Late last night, I finally finished Kubica’s latest novel, Pretty Baby.  With so much going on in my life at the moment, it took me weeks to finish it (which is very unusual) but, unlike most novels that sometimes go unfinished when I don’t have the time for them, I couldn’t get Kubica’s characters out of my head.  Even if I only had fifteen minutes to read, I went back to the characters in the book.  I hated that I didn’t have the time to devour it all in one sitting!  When I was done reading, I only had one thought:  WOW!  WOW!  WOW!  It was that good!

What can I tell you about Pretty Baby that won’t ruin the suspense and surprise ending for you?  This is hard!

The setting is Chicago, near the L platform.  A middle-aged woman sees a young girl and her baby waiting in the terminal.  They’re clearly homeless, and the woman can’t get the girl and her baby out of her head.  But she goes on, assuming she’ll never see them again.  As fate would have it, however, their paths cross on a couple more occasions and the woman is determined to help the young woman.  She just can’t leave her on the streets with an infant child, so she does the unthinkable — the one thing so many of us wish we could do, but don’t because we don’t know what we’re dealing with.  She takes the two home with her where she shelters and feeds them, overriding her husband’s and daughter’s vehement objections.

So begins a story with a dozen twists and turns — coupled with secrets, lies and misunderstandings — that will keep you on your toes until the very last page!  This is not a novel with secrets that are easily discovered!  You might think you know what’s going to happen, but you’ll still be guessing until Kubica slowly unravels the truth, piece by piece.

One of the elements I loved best about Pretty Baby — and The Good Girl before it — is that you’re never quite certain who “the good guy” is.  You think you know who it is, then the author casts suspicion elsewhere — and then you’re sure you know who it is, then more suspicion is cast in yet another direction.  Finally you just decide to quit guessing and just go with the flow.

If it’s not already, Pretty Baby is destined to be a best-seller.  It’s that good!  I can’t remember a time when I’ve been so enthralled with a story, anxious to discover the truth hidden within the characters.

Pretty Baby will appeal to those who enjoyed Kubica’s first novel, but also to those who couldn’t get enough of Gillian Flynn’s Gone Girl.  Actually, she reminds me of what I loved most about those early novels by Mary Higgins Clark, minus the creepy stalkers and serial killers.  The suspense is similar.

For more information, check out the author’s website using THIS BUTTON.  If you’re interested in purchasing a copy of this book, I’ve made it easy for you!  Simply use one of the buttons below to purchase through Amazon,Barnes & Noble, or iBooks online.  Enjoy!