Happy New Year! It’s so hard to believe 2020 is here! I remember issuing in a new century only 20 short years ago. It seems like only yesterday!

With the release of ROAM last year and my crazy-busy schedule, I’ve allowed myself to neglect this blog. I’d like to rectify that in 2020. Toward that end, I’ve decided to start a weekly “Weekend Read Recommendation” to run every Friday in hopes of offering you something fun to check out for your weekend.

This first edition is dedicated to Kimberly Gabriel and her page-turning young adult thriller, EVERY STOLEN BREATH. And, as a special treat this week, Kimberly is joining me for an Author Q&A about this novel and the process that brought this amazing story to readers.

First, let me introduce you to EVERY STOLEN BREATH by Kimberly Gabriel!

Two years after her father’s murder, Lia Finch is the only one left still pursuing his killers.

In downtown Chicago, teenagers have been attacking their victims in packs. Sharing the coordinates of their targets through social media, the swarm emerges from the crowd and descends on a single person, with each member landing a blow until the victim is dead. Local authorities dismiss it as gang violence they can’t control. But Lia is convinced these attacks are politically motivated and controlled by a syndicate of organized crime that thrives on power and intimidation. Desperate to prevent another death, Lia teams up with a teen hacker, a fame-hungry reporter, and the mysterious boy who might have been the cause of her father’s murder. But by the time Lia realizes the deadly consequences behind her obsession, she’s already become the swarm’s next target.

Inspired by the real-life “flash mob” violence that hit Chicago in 2011, EVERY STOLEN BREATH is a fast-paced, immersive thriller, which looks at just how hard one girl will fight back against the crowd knowing any breath might be her last.

Wow! What a ride! From the first page to the very last, this young adult novel is every bit the page turner as one might find in a James Patterson novel. To say I loved this novel is an understatement.

One of my favorite things about this novel is the opening chapter. The story opens with the reader learning immediately that someone is about to die. But, who will commit the murder is unclear, so the reader is pulled in immediately because the need to know who the murderer is and why is very compelling. Almost immediately after, the reader is swept up into a fast-paced story about murder and intrigue. The reader thinks he knows who the mastermind is behind these murders, but trust me when I say that everything clear is actually blurry.

I strongly recommend this book to everyone who loves a good thriller. Though it is categorized as young adult, I wouldn’t hesitate ta second to recommend this novel to adult readers who enjoy a good puzzle. I promise it won’t let you down. 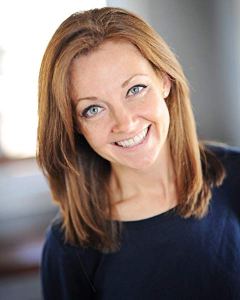 Kimberly Gabriel started writing in fourth grade when she wrote, bound, and gave away books of terrible poetry to family and teachers as holiday gifts. Today she is an English teacher, who still squanders all free minutes to write and uses it as the best scapegoat for her laundry avoidance issues. When she is not teaching or writing, Kimberly is enjoying life with her husband, her three beautiful children, and a seriously beautiful boxer in the northern suburbs of Chicago. Every Stolen Breath is her debut novel and a Junior Library Guild Gold Standard Selection.

QUESTION: In a letter to readers related to EVERY STOLEN BREATH you mentioned that the Swarm depicted in the novel was inspired by similar incidents in Chicago some years back. Can you talk more about that, the incidents that inspired the Swarm, and how long you ruminated over the idea before it became a first draft.

ANSWER: In 2011, a series of “flash-mob” attacks broke out around Chicago near where I lived. I remember reading stories where dozens of teenagers would suddenly emerge from the crowd and descend on one tourist to mug and attack. The stories terrified me and for months after they occurred, I couldn’t stop thinking about them. Eventually I took that concept, made it worse, added elements of mystery and romance to it, and turned it into the basis of EVERY STOLEN BREATH. I started writing ESB’s first scene at Navy Pier probably seven or eight months after the first real attack.

QUESTION: One of the things I enjoyed best about Lia (the main character) was her complete lack of perfection, specifically her asthma. What inspired you to write a character with such severe asthma?
ANSWER: Thank you. I wanted Lia’s strength to reflect the type of strength I see in my classroom and in my own children. I almost lost my oldest son when he was born prematurely. As an infant, he had debilitating asthma, and as he grew older, his chronic illnesses led to his struggle with anxiety. Throughout all of those setbacks, which he eventually outgrew, he remained determined, headstrong, and optimistic in ways that continue to impress me every day. My son was very young when he went through all of that, and Lia carries those parts of him in her. Lia perceives her asthma, anxiety, and PTSD as weaknesses that hold her back. But I’ve always felt she demonstrates her fierce drive and resilience by pushing through each setback. Some of the strongest, most determined students I’ve ever had in my classroom have become that way by battling adversity, and as a result, building their anti-fragility. I wanted Lia to reflect that because to me that’s what real strength is.

QUESTION: What, if any, challenges did you encounter in the writing or publishing of EVERY STOLEN BREATH?

ANSWER: I received a lot of rejection along the way in every step of this process. Luckily, I’ve become very good over the years about dismissing criticism that doesn’t help me improve and using it to strengthen my story when the criticism is smart. In the end, many of my rejections helped me turn it into what it is now.

QUESTION: I understand you were selected as a PitchWars Mentee. Can you talk a little about that process, what you gained from it, and how it led (or didn’t lead) to finding an agent? (Note: PitchWars is a Twitter “contest” to assist aspiring authors to connect with the writing community, find a mentor, tweak their work in progress, and eventually find an agent or publisher. For more information about PitchWars, use this link.)

ANSWER: I was selected to be a PitchWars mentee by Dawn Ius in 2016. After she picked me, I had two months to revise my MS while she mentored me along the way. It was the first time I had to revise under deadline, and at the time, it felt incredibly difficult. But it taught me how to revise quickly and efficiently. More importantly, it immersed me in a wonderful writing community from which I still benefit, and Dawn’s edit letter gave me really great feedback that elevated my writing. I didn’t get my agent from that contest. I found my agent a few months later, but I like to say that PitchWars was the greatest springboard that propelled me into the industry.

QUESTION: EVERY STOLEN BREATH is your debut novel. We’d love to hear about your submission process, how you learned about your title’s acquisition, and your first thoughts when you learned it was being acquisitioned.

ANSWER: Blink showed interest early on during our submission process, but because it was close to the holiday season, it took several months and meetings for them to finally make an offer. I knew the day Blink was having the final meeting about my book, so I kept my phone very close to me. At some point, my agent emailed me, asking when we could talk. I was in the middle of teaching and had to wait thirty very long minutes until my lunch, during which time I was completely worthless as a teacher. One girl had to literally repeat her question three times to me before it registered. When the bell rang and my agent finally called to tell me, I turned into an awkward mess of crying, shaking, and giggling all at once. I’d been writing and pursuing publication for ten years, and then suddenly I was going to be published by HarperCollins? I still get teary-eyed thinking about it.

QUESTION: Can you talk a little about your debut year? What did you learn? Anything that surprised you? What do you wish someone had told you?

ANSWER: I loved getting to know my fellow Novel19s during our debut year. That support network became one of my favorite parts of the journey. In fact, there were many parts of the experience that I really enjoyed. That said, I’m so glad the year is over. As exciting as the debut year can be, it’s also filled with so much anticipation and uncertainty, neither of which I do well with. Because I was one of the last to release, I was able to learn from everyone who went before me. Unfortunately, that didn’t necessarily help prevent any of the anxiety or ease the pitfalls when they came.

QUESTION: What are you currently working on? Do you have any other titles slated for publication?

ANSWER: I have nothing slated for publication yet, but I’m currently working on a new thriller that begins with a dead girl, a gamer, and a bus stop bench. From there it spirals out of control with secrets, revenge, social media, regret, denial, and, of course, murder. Set in Chicago, this one has a slight paranormal twist to it, which I’m excited about.

EVERY STOLEN BREATH is available at all major book retailers. For your ease, you can usethis link to purchase your copy through Amazon.